The Viridian Labyrinth - The Behemoth

The Gladekeeper is one of The Eleven, and reigns over The Viridian Labyrinth and the Nature Flight.

The Gladekeeper is mostly covered in bright green leaves. Trees and branches sprout from her body bearing lush leaves of their own, except on the antler-like branches atop her head. Vines hang down from her chin, giving the appearance of a beard. The skin that does show on her body is brown, like soil, and some green can be seen where the leaves end near her back half. Her back legs end in roots rather than toes.

She is among the youngest of the gods (9th in terms of when she appeared in the lore) older only than the Arcanist and possibly slightly older than the Plaguebringer. The Gladekeeper's exact personality is unknown, as in the lore she only fought with her sister, and did not interact with the other gods. She desires to revitalize the land and spread growth and life throughout it.

A Dance of Life and DeathEdit 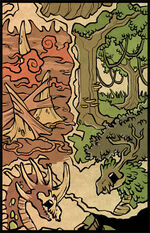 The Gladekeeper was born into the Third Age along with her sister, the Plaguebringer. The apocalypse caused by the previous civilization had destroyed much of the world. However, concentrated energies rained across the shattered landscape, seeping into the charred remains of life and industry.

Arcane particles sank deep into the crust, enriching the roots of trees and plants that had been sapped of their life during the blast. Currents of energy coursed up trunks and into the cells of branches. Reactions sparked beneath the surface sending waves of magic through stalks of grass, clusters of bushes, and monumental redwoods. Ethereal flowers erupted from cracks and crevices, and each green cluster grew larger and more robustly than the last. Nature had capitalized on the fallout, taking control of the energies to repair itself.

The rampant regrowth began to take on the guise of a colossal figure. Tree branches and leaves strained and twisted together into four thick, bark-covered stumps. A leafy canopy connected the four towers, until the burgeoning garden had materialized into a distinguishable silhouette. There was no mistaking what had been created: a wyrm of boundless potential, birthed from the leaves and the grass and the moss. The Gladekeeper had grown out of the ashes.

It did not take long for the sisters to encounter each other. While the land healed and fell ill all around them, the deities of nature and plague embroiled themselves in vicious, unending combat. Thick roots and brambles wrapped themselves around the Plaguebringer’s legs and arms, chaining her to the earth, only to wither and melt away at her defiling touch. Contagion reached and groped at the Gladekeeper’s every move, but she countered with razor-sharp torrents of bladed leaves and piercing branches. The land took on the hues of red and green as the two sparred and tumbled eternally. Hilltops and cliffs were torn asunder, replaced with lush tropical gardens or seething, stinking, bone piles. Chaos seemed the only constant.

The Release of the ShadeEdit

As the Arcanist unknowingly attracted the attention of the Shade, the sisters were still fighting. A harrowing moan rocked the realm. Startled, the Gladekeeper relaxed her jaw, releasing the Plaguebringer's neck. The defiling wyrm tumbled down a ravine, scrambling to right herself. Poised to lunge back into the fray, she froze in her tracks when another deafening groan shuddered over the canyon. The two sisters were silenced as they both raised their heads and witnessed the bleak canopy spreading out above them.

In the far distance, a beacon of radiating pink light pulsed in the clouds, illuminating the mighty Pillar on the horizon. Crackling bolts of thunder surrounded its summit, and each passing moment resulted in more disappearing stars. It was as if a mighty being was blowing out a billion candles.

Terrified at what this could mean, the adversaries fled in opposite directions, determined to preserve themselves.[2] After the Pillar shattered, the Gladekeeper watched the older gods awake from their long slumber.

The Gladekeeper claimed the Viridian Labyrinth as the home for her and her children. In the heart of Nature's lands lies the Behemoth. Some say that the Gladekeeper herself lives within its great trunk, while others believe that the tree itself is grown into her mighty flank. So colossally does it rise, that it is visible from nearly every horizon in the world, a reminder of the power of unbridled life.[3]

The following are forum posts made by the Gladekeeper's official Flight Rising account. These can be assumed to be representative of her personality and way of speaking.

All is well, shall we celebrate?" - in response to the Festive Favors shop initially accidentally being Arcane themed when the 2014 Greenskeeper Gathering started due to a bug.[4]

I am so thrilled to see that our Greenskeeper Gathering is finally doing as it should. For awhile, I was a little concerned we would not be able share the wealth of our forest with everyone. Stop by Festive Favors, isn't our Sprite adorable? You know you want to adorn yourself in our fabled forest finery.

Should the time come that you find yourself in need of a new Lair, do remember our generosity in both wealth and patience. We welcome new Clans to our forest with open wings as long as they join us. Non-Nature dragons...we do not want our precious greens and flowers soiled with the filth of other Flights.

Happy Greenskeeper! Let Nature take all!" - another response to the 2014 Greenskeeper Gathering glitch[6]

Just remember, my dear, equal shares. Don't you have another Festival in the future? I'm sure you'd hate to see your things "borrowed." " - in response to the Plaguebringer expressing that she was going to take all of the Nature festival items.[7]

You have a lovely day, my dear, and enjoy our lush, bountiful, green Gathering!" - in response to the Plaguebringer responding to her previous quote.[8]

Tell me, isn't our festival magnificent?

But, alas..." - in response to the first Greenskeeper Gathering skin contest winners[9]

Official images and depictions of the Gladekeeper found on site.

Vista: Gladekeeper
Add a photo to this gallery

Retrieved from "https://flightrising.fandom.com/wiki/The_Gladekeeper?oldid=107954"
Community content is available under CC-BY-SA unless otherwise noted.