Sea of a Thousand Currents - The Spiral Keep

The Tidelord is one of The Eleven, and reigns over the Sea of a Thousand Currents and the Water Flight. He resides deep within the sea in a giant conch shell. It is there he goes about his prophecies.

The Tidelord is a strong, almost entirely blue dragon that shows great resemblance to the Guardian species. His underwing and the webbing between his feet are a pale cyan. His underbelly is a slightly lighter shade of blue, while the top of his wings are the darkest shade of blue on him.

The Tidelord has green fins on his head and legs, and much like his wings, the webbing is torn and jagged on the ends. Adorning his head are two horns facing outwards that curve down and glowing blue eyes without pupils. He has gills along his torso with a long, powerful tail. He also has small clusters of barnacles scattered across him.

The Tidelord is one of the First Four, along with The Earthshaker, The Windsinger, and The Flamecaller. They were the first of the Eleven to be birthed into the world. He and the rest of the Four decided to end the magical chaos that had birthed them, spending the next few millennia forming the world into their own images.

Over this period of time, the Tidelord summoned great storms and floods to cool the Flamecaller's invasion of molten fury, letting the heat and moisture mingle to form continents, oceans, and rivers. Though the Four were happy with their combined efforts, they were not without their differing opinions on the direction their young planet should take. The Tidelord believed that water should be the prevalent element. He proclaimed that "with more water, the world would shine like a blue pearl, unlike so many in the Heavens. It could stand alone in beauty and tranquility." Concerned only with their own campaigns, the First Four bickered and quarreled over the planet, until bitter conjecture turned to combat.

The Tidelord warred with the Windsinger, stirring up roiling, violent storms. The cataclysmic energy created by their relentless attacks made the clouds themselves swell with anger. It was not long until the charged mass expelled a horrendous cascade of electric tempests, as well birthing a frustrated Stormcatcher. Stunned by the event, the Tidelord and Windsinger abated, unaware of how to handle this new threat.

The First Four's warring had brought immense stress onto their planet, leaving it in far worse shape than when it had been newly-formed. Unrestrained energies were being exhibited in their extremes everywhere the Tidelord looked. The relentless ejection of magical energy had not gone unnoticed, attracting a darkness known as the Shade that sought to inhale the magical life from their home.

With the arrival of the Shade, the Tidelord fought alongside the seven other deities to protect his home from its hunger. For hundreds of years they fought, finally eradicating the last remnants of the Shade. After the truce, the deities lent their remaining strength to blanket the earth in a magical shield. With this combined energy, it was enough to protect the earth from another attack from the Shade. The Tidelord fused his body with the other deities to create the World Pillar. [2]

The Tidelord was not seen during the Second Age, instead slumbering in the Pillar for its entirety. [3]

The Tidelord was again not present until the very end of the Third Age. At the turning of the age, The Arcanist shattered the Pillar and the First Eight were finally returned to the world after many years. [4]

At the beginning of this age, all of the Eleven abandoned the sanctity of the Pillar and went their separate ways. All of the other Gods gave their various reasons for wanting to go, but the Tidelord muttered darkly about impending strife and the splintering of friendships before leaving and slipping into a murky lake.

He traveled south and eventually settled in a large sea fed by waters from the east. Finding a slab of the destroyed Pillar there, he decided to create new beings, made in his image, to guard the slab of the pillar that still held some power of his. Thus, the first Water Dragons were born.

Each successive generation that was born, the more attuned they became to the Water Element. Becoming devoted to the slab, The Tidelord, and the Sea of a Thousand Currents, now, one thousand years into the age, seek to exert The Tidelord's dominance over the rest of the clans that now dominate the world. [5]

On March 14th 2018, the Tidelord has seemingly vanished from the Spiral Keep according to the release of the lore story Hear Today, Gone Tomorrow[6]. This is further confirmed by a series of posts on March 20th where the other ten deities speak in reference to the aftermath of their flight's stories but the Tidelord doesn't. He does, however, appear in a banner on the Earthshaker's post that states "To be continued..."[7]. Mixed Elements, a follow-up to the Water lore story, was released on April 15th, 2019 and confirms that while the Tidelord's whereabouts are still unknown, he is not dead.[8]

As of this time, the Tidelord's Flight Rising account has made no forum posts besides the announcements for the Wavecrest Saturnalia.

Official images and depictions of the Tidelord found on site.

Vista: Tidelord
Add a photo to this gallery 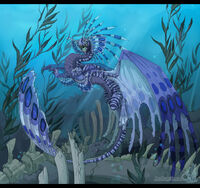 Retrieved from "https://flightrising.fandom.com/wiki/The_Tidelord?oldid=107949"
Community content is available under CC-BY-SA unless otherwise noted.